Redesign a material handling system for boiler biomass that enhanced feedstock flow and had a long service life.

A small power producer had a contract to supply a nearby malting facility with its electricity and heating needs. The plant produced approximately 20 Megawatts of power. Any excess was sold to the area utility grid. The power producer struggled to fulfill its obligations at times due to unexpected downtime of conveyors and poor material distribution.

The material flow issues began at the truck receiving system to the storage facility. The power producer received a mixture of woodchips, hulls, and hog fuel by truck, which was unloaded into a pit hopper either by truck dumper or live bottom trailer.

The conveyor under the hopper was expected to meter the material, elevate material out of the pit, and transfer it to a bucket elevator. However, due to shortcomings with the original layout and plant design, the result was a pit, hopper and conveyor which was less than desirable. The inaccurate layout created an instantaneous load on the conveyor which caused excessive stress on the drive, chain and housing of the conveyor.

In addition, the short horizontal section and a steep +60° incline made the loads on the chain flights excessive. This created premature wear, damage and unexpected downtime.

The power producer needed a better way to move feedstock from unload and storage to the boiler. The goals of a redesigned material handling system were a reduction of equipment, streamlined material flow, built-in redundancy, and improved safety and reliability.

CDM, a leader in the design and manufacturing of drag chain conveyors, was contracted to supply two En-Masse Drag Chain conveyors with a capacity of 60,000 lbs/hr per conveyor. The two conveyors allowed the facility to have built-in redundancy and ensure a continuous supply of fuel to the boilers. 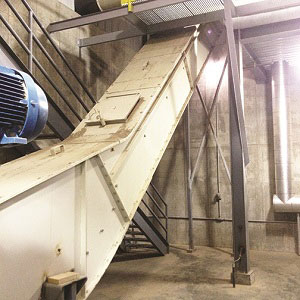 The new conveyors would be designed in an L-Path configuration. This design allowed for a short horizontal section, +/- 20 ft., and relatively long incline section, +/120 ft., @ roughly a 40° incline to provide 80’ of lift.

This enhanced layout and design along with proper selection of a chain and flight assembly would allow the power producer to effectively unload and evenly distribute the feedstock. The exclusive dropped forged-case hardened chain resists wear and provides a long service life, even in harsh service environments. 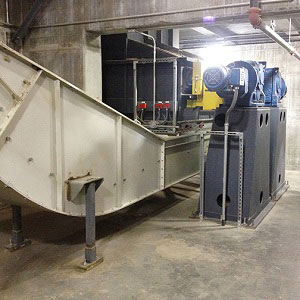 The power producer had a tight capital budget and a short window to get the conveyors installed; the malting company was running six days/week and could not afford a loss of power or a blackout. CDM worked with the power producer to reuse some of the existing conveyor components that still met safety and performance specifications.

The CDM En-Masse Drag Chain Conveyors have been operating for years without downtime. The fuel handling system redesign enabled the power producer to reduce unloading time of the trucks and minimize maintenance and downtime. This facility has improved safety, reliability, and feedstock flow while removing countless pieces of equipment from operation.