A university in the northeastern part of North Dakota needed to upgrade their central heating system. The winters in the region are long and cold requiring a 7 month heating season. The aging system was costly to operate due to high maintenance and lack of efficiency.

A university in the northeastern part of North Dakota needed to upgrade their central heating system. The winters in the region are long and cold requiring a 7 month heating season. The small campus consisted of administrative buildings, several lecture halls, and dormitories.

The heating plant on campus had a boiler that produced steam which was distributed underground to each of the buildings for heating and water. The aging system was costly to operate due to high maintenance and lack of efficiency.

The university hired a contractor to design and build a new central heating system with the goal of gaining operating and heating efficiency while adhering to a strict budget and calculating an overall return on investment of less than 5 years.

To achieve the university goals, the contractor not only purchased a new high-efficiency boiler but also needed an efficient material handling system for the coal and ash. North Dakota’s abundant coal reserves made it an economical fuel that offers high heat content (BTU) per ton. 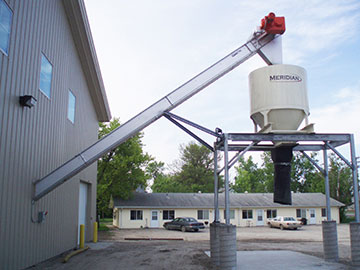 The material handling system, engineered and manufactured by CDM, started with a truck receiving conveyor. The conveyor was designed to handle material flow rates of 55 TPH to ensure the plant never ran short on fuel.

The conveyor is located in a covered receiving area below grade in a concrete pit. Dump trucks back into the covered area and unload the coal into a hopper. The receiving conveyor meters the flow rate from the receiving hopper elevating the coal approximately 40’ at a 70° incline. The coal was delivered in an open-air truck exposing the material to the environmental elements.

The transport and exposure created a delivered material that had a wide range of characteristics; from free-flowing fines to 2” minus product, to wet product that could potentially cake and even freeze. The vast range of coal characteristics required a CDM 142STD OO1 series of chain. This chain design provided a skeletal flight profile which would effectively carry material with a broad-spectrum of characteristics.

The design of OO flight style allowed the conveyor to handle these various properties consistently and efficiently.

The coal is transferred into a bunker distribution conveyor. The confines of the plant and the desire to maintain a small footprint on campus were key design elements for the project. This made the use of the CDM En-Masse conveyors very appealing due to the high efficient utilization of space which correlated to a small conveyor footprint when compared with other types of conveyor technology.

The truck receiving conveyor is designed to handle 2” minus coal and meter the flow rate to the downstream equipment. Coal is typically not a challenging material to handle. However, due to environmental exposure and multiple handling, widely varying particle size and lack of consistency in material characteristics coupled with the freezing conditions, temperatures in the region can reach -40 degrees F, provided conveyor design challenges.

To account for these variances, CDM designed the conveyor to operate at a conservative speed and provided a chain that is robust enough to handle and break-up friable, frozen coal while also profiled to handle free-flowing fines. 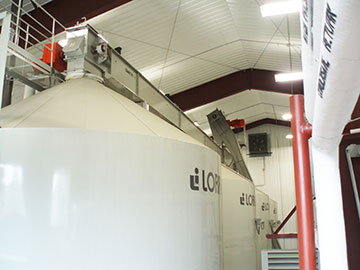 Downstream of the truck receiving conveyor CDM supplied the bin distribution conveyor along with manually operated slide gates. The purchased bins were supplied with bin level indicators which provided operators and monitoring personnel with ample warning to close the upstream gate and open downstream gate/s to provide an uninterrupted flow.

Due to the small footprint of the plant CDM needed to convey the coal back toward the terminal station of the conveyor in order to fill the first of four bins. CDM accommodated this requirement by supplying the conveyor with an intermediate plate and using the return chain to move the product toward the terminal station, letting the coal drop down into the lower conveying chamber where the coal is distributed into the storage bins. Coal is then drawn off the bins using screw conveyors which directly feed the four boilers.

After the burn process is complete ash is the by-product that remains. The ash from the boilers is feed to the final EnMasse conveyor in the system. The ash conveyor collects the bottom ash from the boilers and also collects fly ash from the baghouse. The totally enclosed conveyor transfers and elevates the ash without emissions from inside the facility to an outside bin. Ash is highly abrasive, sluggish, and holds a temperature on average of about 400 degrees F.

To accommodate the elevated temperatures as well as the abrasive product and to maintain a seal on the boilers CDM constructed the conveyors using abrasion resistance plate (AR 400BHN) and provided all shaft penetrations with high temperature packing gland shaft seals. The conveyor was engineered with a spring-loaded take-up to allow for cushioning to protect the chain from shock loads, upset conditions, and differential thermal expansion between the conveyor housing/casing and the chain. 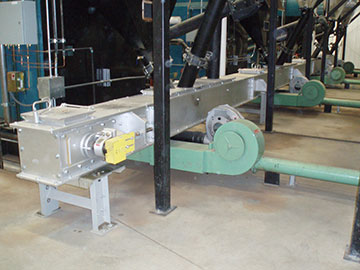 CDM engineered each conveyor with zero speed switch sensors, plug chute and chain break sensors which were wired into the control room. CDM designed the material handling conveyors with quantified cost savings through component standardization across all supplied conveyors.

CDM was able to provide maximum standardization among the conveyors with commonality between bearings, sprockets, shaft selection and design, gear reducers, and several other ancillary components.

After the first year of operation university officials stated the new plant saved hundreds-of-thousands of dollars in heating and maintenance costs; outperforming expectations and projected to come in under the 5 year ROI target. In addition to the evaluation of capital costs, the goal of reduced maintenance has also been achieved. The En-Masse drag conveyors have had zero unplanned downtime and only require inspection upon routine maintenance.