A large +/-200 MW generation facility in Illinois had an ongoing maintenance challenge with the coal ash handling systems installed in the plant. Previous expansion left the utility with a range of different conveying equipment and complicated conveyor designs for handling the high temperature ash coming from the bottom of the boilers. The utility, in an effort to streamline operations and reduce maintenance costs, sought a better method for handling bottom ash from the nine boilers in the plant.

A large +/-200 MW generation facility in Illinois had an ongoing maintenance challenge with the coal ash handling systems installed in the plant. Over the years, the regional utility had expanded to serve other sister utilities and the growing electricity demands of the area. Each expansion or upgrade project was awarded to various engineering, procurement, and construction contractors (EPC) based on a sealed bid quotation. The result of this process left the utility with a range of different conveying equipment and complicated conveyor designs for handling the high-temperature ash coming from the bottom of the boilers.

The ash was then fed to a drag conveyor which elevated the ash to storage. The existing cooling screw, rotary feeder and drag conveyor we all high maintenance items for the plant. In addition, the cooling screw required ancillary pumps and water filtration. The utility, in an effort to streamline operations and reduce maintenance costs, sought a better method for handling bottom ash from the nine boilers in the plant.

The utility plant had a goal to reduce maintenance time and costs and to improve operating efficiencies. The key component to achieving this goal was to reduce the many types and complexity of the ash conveyors. The engineering manager for the utility contacted CDM to request a site visit for an evaluation of the plant’s ash handling conveyors. CDM was called to assess the existing conveyors because of the company’s 40 years of experience with ash handling systems.

Upon evaluation, the CDM team found each of the nine boilers was unique in every way; the manufacturer, the capacity, the ash draw-off position, the temperature of the ash at discharge, the volume of ash, and the distance and layout configuration needed to draw-off the ash effectively was different for each boiler.

Following meetings with maintenance, engineering, and operations all teams agreed that mechanical En-masse and Drag Chain Conveyors would be the best choice for meeting the ash handling requirements of each boiler and to meet the goals of conveyor standardization and minimal maintenance. 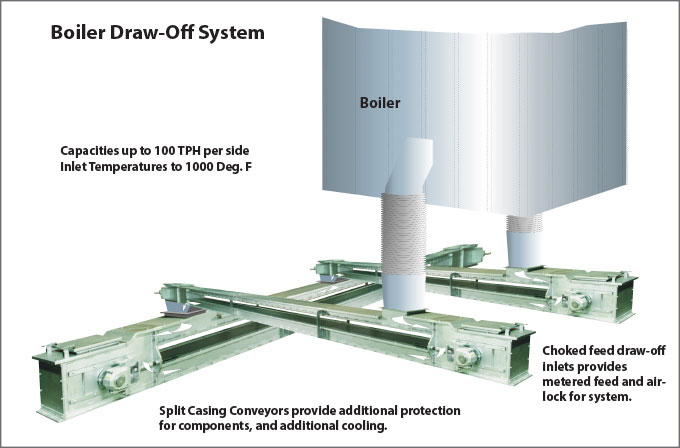 The first ash handling system redesign that CDM performed was the water cooled screw conveyor. The retrofit design involved an engineered -pair of CDM Drag Chain Conveyors along with a collecting transfer unit. The split trough design provided for the sealing process at the boiler discharge while also facilitated in ash cooling.

The CDM metering conveyor design limited the product bed depth to just greater than the height of the flights while the speed of the return chain metered the discharge flow. This engineered flow design allowed a head of ash to remain in the boiler; thus providing an air seal at the boiler discharge. This seal prevented the flow of air downstream of the boiler and maintained boiler efficiency. The conveyors were provided with reinforced construction to mitigate the potential for deformation due to product temperatures, packing gland shaft seals were provided to maintain a seal on the conveyors, and increased bolt spacing was provided to account for thermal expansion.

The conveyors were also designed to minimize chain wear with the use of CDM’s TPL series chain where the chain rides on a sacrificial flight. to handle the high temperature of the bottom ash feeding into the conveyor.

This standardization allowed the plant stock a single chain series and assembly of chain along with various flight types and styles for use throughout the facility in their existing equipment. The standardization of design saved the utility hundreds of thousands of dollars in replacement of conveyors.

This success transferred into a complete rework of all nine existing boiler systems, along with the implementation of two additional new boilers. The facility has now reduced its store items to only two styles of CDM drop-forged chain, sprockets and terminal idlers.