A Pulp & Paper facility in Northwestern Pennsylvania had extensive issues with conveyor corrosion and subsequent failure on the salt cake handling system due to the corrosive vapor that was generated when the cake was introduced to a black liquor tank. The corrosion led to high maintenance requirements and frequent downtime due to the corresponding failure.

Salt cake is a byproduct of the pulping process in paper or corrugated box production. The pulping process typically begins when wood chips and other raw materials are sprayed with a liquor in a digester and cooked in a cyclone. The cake is produced when the cooked mixture is pressed, releasing the liquid and producing solid byproduct cake. The salt cake in its solid form is not corrosive, with typical makeup characteristics as Na2SO3. (Snyder, 1995, p. 1).

A Pulp & Paper facility in Northwestern Pennsylvania had extensive issues with conveyor corrosion and subsequent failure on the salt cake handling system due to the corrosive vapor that was generated when the cake was introduced to a black liquor tank. The vapor would rise, passing the high point of the conveyor and cause server corrosion to the housing, drive assembly, and chain of the conveyor.

The corrosion led to high maintenance requirements and frequent downtime due to corresponding failure. The Pennsylvania paper producer sought to fix the current conditions related to the liquor vapor corrosion on the material handling conveyors to reduce maintenance and improve operating margins. 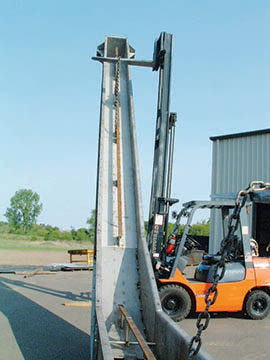 The engineering team at CDM performed an extensive evaluation of the current operating conditions at the plant. The facility management and mill staff had a tight budget and timeline for repair or replacement of the conveyors. CDM was challenged to find the best and most economical solution to the current material handling situation.

The CDM team concluded the best option was a retrofit of the existing conveyors fabricated from a stainless steel housing. When CDM inspected the existing equipment it was clear that a vast majority of the corrosion was occurring near the drive/discharge end of the conveyors when compared to the terminals. This was due to the incline of the conveyors and where the vapor was trapped.

To provide additional corrosion resistance in this area, CDM also designed the conveyor sprocket tooth plates, hub and shaft in stainless steel. The use of stainless steel for the housing and key components where corrosion was heaviest afforded the necessary corrosion resistance to mitigate future failures and downtime; however stainless is a softer metal and has lower heat treat limits making the material more susceptible to erosion as the chain runs through the conveyor. 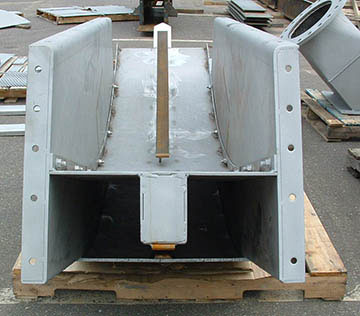 CDM sized the chain with a 142HVY series chain. The chain has a base of 20MnCr5 alloy and supplied 440C stainless steel chain pins. Each of these design elements was selected to combat the corrosion.

Component standardization for equipment is an important goal in most manufacturing plants. Standardization reduces the total cost of ownership because it limits the number of different components required to be in plant stores. Standardization requires less training for maintenance staff and helps to reduce spare part purchasing costs.

CDM also made standardization part of the design criteria, using a base BT style flight constructed of 1/2” x 2” material and provided flight extensions using 1/4” material. This design allowed the paper mill to stock a standard base BT chain and simply add the flight extensions to suit the given chain.

CDM worked with Pulp & Paper Mill maintenance staff so the retrofit conveyors could be installed with money from an existing maintenance budget. CDM reviewed the design of the structural steel connections and anchor points and found that they were within safety standards and could be reused. CDM also worked with on-site crew to provide instructions on how to safely and effectively reuse as many existing components as possible.

The retrofit conveyors have allowed the production of the mill to remain steady and without unplanned downtime from conveyor failure. The proper engineering and design of the conveyors have proven accurate and successful at mitigating the effects of the corrosive vapor on the conveyors and components.

A Payback Measured in Months

The cost of the conveyors and the installation measured against the increased uptime and reduced maintenance costs provided a positive return on the retrofit project of less than 12 months. The project has proven successful and production levels have been returned to peak levels.